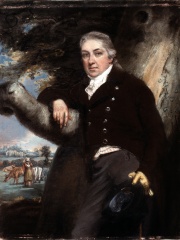 Edward Jenner, (17 May 1749 – 26 January 1823) was an English physician and scientist who pioneered the concept of vaccines including creating the smallpox vaccine, the world's first vaccine. The terms vaccine and vaccination are derived from Variolae vaccinae (smallpox of the cow), the term devised by Jenner to denote cowpox. He used it in 1798 in the long title of his Inquiry into the Variolae vaccinae known as the Cow Pox, in which he described the protective effect of cowpox against smallpox.In the West, Jenner is often called "the father of immunology", and his work is said to have "saved more lives than the work of any other human". Read more on Wikipedia

Edward Jenner is most famous for his development of the smallpox vaccine. Jenner's vaccine was the first to use cowpox, a related virus, as an immunization against smallpox.

Among physicians, Edward Jenner ranks 6 out of 509. Before him are Hippocrates, Florence Nightingale, Galen, Paracelsus, and Ignaz Semmelweis. After him are Josef Mengele, Robert Koch, L. L. Zamenhof, Basil of Caesarea, Albert Schweitzer, and Andreas Vesalius.