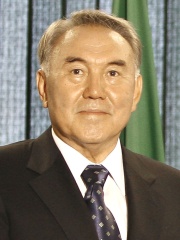 Nursultan Abishuly Nazarbayev (Kazakh: Нұрсұлтан Әбішұлы Назарбаев, romanized: Nūrsūltan Äbişūlı Nazarbaev, pronounced [nʊɾsʊɫˈtɑn æbɪ̞ɕʊˈlɯ nɑzɑɾˈbɑjev]; born 6 July 1940) is a Kazakh politician and military officer who served as the first President of Kazakhstan, in office from country’s independence in 1991 until his formal resignation in 2019, and as the Chairman of the Security Council of Kazakhstan from 1991 to 2022. He held the special title as Elbasy (meaning "Leader of the Nation", Kazakh pronunciation: [jelˈbasɯ]) from 2010 to 2022. Nazarbayev was one of the longest-ruling non-royal leaders in the world, having led Kazakhstan for nearly three decades, excluding chairmanship in the Security Council after the end of his presidency. Read more on Wikipedia

Nursultan Nazarbayev is the president of Kazakhstan. He is most famous for his role in the dissolution of the Soviet Union.

Among politicians, Nursultan Nazarbayev ranks 268 out of 15,577. Before him are Neville Chamberlain, Carl XVI Gustaf of Sweden, Tolui, Baldwin IV of Jerusalem, Philippe Pétain, and Rüstem Pasha. After him are Philip IV of Spain, Mahmud II, Charles the Bald, Edward III of England, Elizabeth of Russia, and William the Silent.

Among people born in 1940, Nursultan Nazarbayev ranks 6. Before him are Pelé, Bruce Lee, Al Pacino, John Lennon, and Margrethe II of Denmark. After him are Chuck Norris, Constantine II of Greece, Saparmurat Niyazov, Ringo Starr, Michael Gambon, and Bartholomew I of Constantinople.