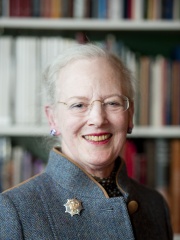 Margrethe II (Danish: [mɑˈkʁeˀtə]; Margrethe Alexandrine Þórhildur Ingrid, born 16 April 1940) is Queen of Denmark and commander-in-chief of the Danish Defence.Born into the House of Glücksburg, a cadet branch of the House of Oldenburg, Margrethe is the eldest child of Frederick IX of Denmark and Ingrid of Sweden. She became heir presumptive to her father in 1953, when a constitutional amendment allowed women to inherit the throne. Margrethe succeeded her father upon his death on 14 January 1972. Read more on Wikipedia

Margrethe II of Denmark is most famous for being the queen of Denmark. She is the youngest daughter of King Frederick IX and Queen Ingrid. She became the queen in 1972 when her father died.

Page views of Margrethe II of Denmarks by language

Among noblemen, Margrethe II of Denmark ranks 8 out of 842. Before her are Henry VIII of England, Marie Antoinette, Ramesses II, Ragnar Lodbrok, Catherine the Great, and Prince Philip, Duke of Edinburgh. After her are Akihito, Archduke Franz Ferdinand of Austria, Queen Elizabeth The Queen Mother, William the Conqueror, Charles, Prince of Wales, and Princess Margaret, Countess of Snowdon.

Among people born in 1940, Margrethe II of Denmark ranks 5. Before her are Pelé, Bruce Lee, Al Pacino, and John Lennon. After her are Nursultan Nazarbayev, Chuck Norris, Constantine II of Greece, Saparmurat Niyazov, Ringo Starr, Michael Gambon, and Bartholomew I of Constantinople.

Among NOBLEMEN In Denmark