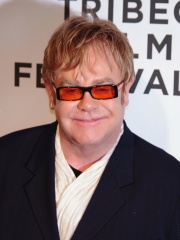 Sir Elton Hercules John (born Reginald Kenneth Dwight; 25 March 1947) is a British singer, pianist and composer. Commonly nicknamed the "Rocket Man" after his 1972 hit single of the same name, John has led a commercially successful career as a solo artist since the 1970s, having released 31 albums since 1969. Collaborating with lyricist Bernie Taupin since 1967, John is acclaimed by critics and musicians, particularly for his work during the 1970s, and his lasting impact on the music industry. Read more on Wikipedia

Elton John is a singer and songwriter who is most famous for his music. He has sold more than 300 million records worldwide, making him one of the best-selling artists of all time.