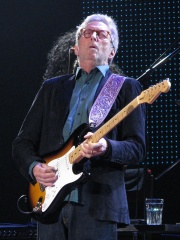 Eric Patrick Clapton (born 30 March 1945) is an English rock and blues guitarist, singer, and songwriter, widely regarded as one of the most important and influential guitarists of all time. Clapton ranked second in Rolling Stone's list of the "100 Greatest Guitarists of All Time" and fourth in Gibson's "Top 50 Guitarists of All Time". He was also named number five in Time magazine's list of "The 10 Best Electric Guitar Players" in 2009.After playing in a number of different local bands, Clapton joined the Yardbirds in 1963, replacing founding guitarist Top Topham. Read more on Wikipedia

Eric Clapton is most famous for being a guitarist and singer-songwriter. He is credited as being one of the most influential guitarists of all time. He was inducted into the Rock and Roll Hall of Fame in 2000.

Among musicians, Eric Clapton ranks 23 out of 2,675. Before him are Arcangelo Corelli, Madonna, Ray Charles, Brian May, Cat Stevens, and Chuck Berry. After him are Mark Knopfler, Jeff Beck, Frank Zappa, Giuseppe Tartini, Władysław Szpilman, and Ronnie James Dio.