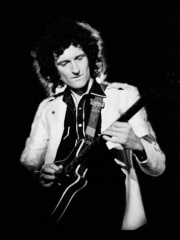 ‹See Tfd› Sir Brian Harold May (born 19 July 1947) is an English musician and astrophysicist. He achieved worldwide fame as the lead guitarist of the rock band Queen, which he co-founded with the singer Freddie Mercury and the drummer Roger Taylor. Read more on Wikipedia

Brian May is most famous for being a guitarist and songwriter for the rock band Queen.

Among musicians, Brian May ranks 18 out of 2,662. Before him are Clara Schumann, Paul McCartney, Leopold Mozart, Madonna, Arcangelo Corelli, and Ray Charles. After him are Jean-Michel Jarre, Charlie Watts, George Harrison, Władysław Szpilman, Ringo Starr, and Arthur Rubinstein.