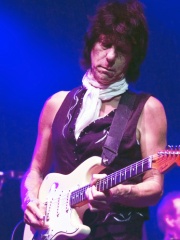 Geoffrey Arnold Beck (born 24 June 1944) is an English rock guitarist. He rose to prominence with the Yardbirds and after fronted the Jeff Beck Group and Beck, Bogert & Appice. Read more on Wikipedia

Jeff Beck is most famous for being one of the best rock guitarists in the world. He has been a member of many famous bands, including The Yardbirds, The Jeff Beck Group, and Beck, Bogert & Appice.

Among musicians, Jeff Beck ranks 25 out of 2,675. Before him are Ray Charles, Brian May, Cat Stevens, Chuck Berry, Eric Clapton, and Mark Knopfler. After him are Frank Zappa, Giuseppe Tartini, Władysław Szpilman, Ronnie James Dio, Bon Scott, and Miles Davis.