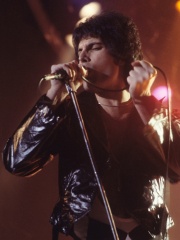 Freddie Mercury (born Farrokh Bulsara; 5 September 1946 – 24 November 1991) was a British singer, songwriter, record producer, and lead vocalist of the rock band Queen. Regarded as one of the greatest singers in the history of rock music, he was known for his flamboyant stage persona and four-octave vocal range. Read more on Wikipedia

Freddie Mercury was a British singer, songwriter, and record producer who led the rock band Queen. He is best known for his powerful vocals and flamboyant stage presence.

Queerty.com
Freddie Mercury remembered on today’s 30th anniversary of his death
The Queen singer died November 24th, 1991, aged 45, of AIDS-related illness.
David Hudson
The Conversation Africa
Freddie Mercury 30 years on – remembering the theatrical, eccentric genius
Beyond just his music, Freddie Mercury’s performances, style, and fluidity influenced both his generation and those that followed.
Stephen Langston, Programme Leader for Performance, University of the West of Scotland
PinkNews
10 of the most inspiring, affirming and charismatic Freddie Mercury quotes to live your life by
Freddie Mercury was unmatched for charisma on stage, but behind the scenes he was a very different person. Here he is in his own words.
Emma Powys Maurice
Freethoughtblogs.com
Let’s Remember: Freddie Mercury, 1946-1991
Freddie Mercury was born Farrokh Bulsara in Zanzibar (a country which no longer exists, now part of Tanzania) on September 5, 1946.  He would have been 75 this year. Instead, on November 23, 1991, after years of media speculation, he announced that he had con…
Intransitive

Among MUSICIANS In Tanzania