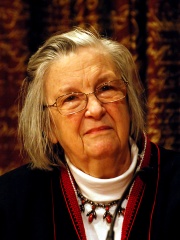 Elinor Claire "Lin" Ostrom (née Awan; August 7, 1933 – June 12, 2012) was an American political economist whose work was associated with the New Institutional Economics and the resurgence of political economy. In 2009, she was awarded the Nobel Memorial Prize in Economic Sciences for her "analysis of economic governance, especially the commons", which she shared with Oliver E. Williamson. She was the first woman to win the Nobel Prize in Economics.After graduating with a B.A. and Ph.D. in political science from UCLA, Ostrom lived in Bloomington, Indiana, and served on the faculty of Indiana University, with a late-career affiliation with Arizona State University. She was Distinguished Professor at Indiana University and the Arthur F. Read more on Wikipedia

Elinor Ostrom is most famous for her work in the field of political economy, specifically in the study of economic governance. She is best known for her research on how communities can manage common resources, such as forests, fish, and water, without resorting to the use of government regulation.