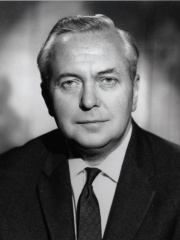 James Harold Wilson, Baron Wilson of Rievaulx, (11 March 1916 – 24 May 1995) was a British Labour politician who served as Prime Minister of the United Kingdom from 1964 to 1970 and 1974 to 1976. Entering Parliament in 1945, Wilson was appointed a parliamentary secretary in the Attlee ministry and rose quickly through the ministerial ranks; he became Secretary for Overseas Trade in 1947 and was elevated to Cabinet shortly thereafter as President of the Board of Trade. In opposition to the next Conservative government, he served as Shadow Chancellor (1955–1961) and Shadow Foreign Secretary (1961–1963). Read more on Wikipedia

Since 2007, the English Wikipedia page of Harold Wilson has received more than 6,937,990 page views. His biography is available in 74 different languages on Wikipedia making him the 2,202nd most popular politician.

Among politicians, Harold Wilson ranks 2,186 out of 14,801. Before him are Ahmad Shah Durrani, Sobekneferu, Nadab of Israel, Marinus van der Lubbe, Crispus, and Clovis IV. After him are Anastasia Romanovna, Faustina the Younger, Babrak Karmal, Lugal-zage-si, George Villiers, 1st Duke of Buckingham, and François Darlan.