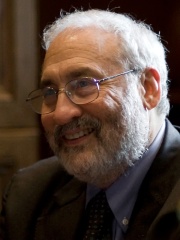 Joseph Eugene Stiglitz (; born February 9, 1943) is an American economist and public policy analyst, who is University Professor at Columbia University. He is a recipient of the Nobel Memorial Prize in Economic Sciences (2001) and the John Bates Clark Medal (1979). He is a former senior vice president and chief economist of the World Bank and is a former member and chairman of the (US president's) Council of Economic Advisers. Read more on Wikipedia

Joseph Stiglitz is an economist who is most famous for his work in the fields of macroeconomics and international trade. He has served as the Chief Economist of the World Bank, a Professor at Stanford University, and a professor at Columbia University.