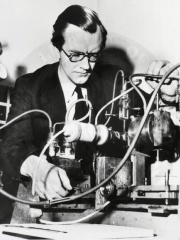 Maurice Hugh Frederick Wilkins (15 December 1916 – 5 October 2004) was a New Zealand-born British biophysicist and Nobel laureate whose research spanned multiple areas of physics and biophysics, contributing to the scientific understanding of phosphorescence, isotope separation, optical microscopy and X-ray diffraction, and to the development of radar. He is best known for his work at King's College London on the structure of DNA. Wilkins' work on DNA falls into two distinct phases. The first was in 1948–1950, when his initial studies produced the first clear X-ray images of DNA, which he presented at a conference in Naples in 1951 attended by James Watson. Read more on Wikipedia

Maurice Wilkins is most famous for his work with Rosalind Franklin, James Watson, and Francis Crick in discovering the double helix structure of DNA.

Among PHYSICISTS In New Zealand

Among physicists born in New Zealand, Maurice Wilkins ranks 2. Before him are Ernest Rutherford (1871).