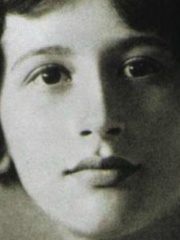 Simone Adolphine Weil ( VAY, French: [simɔn vɛj] (listen); 3 February 1909 – 24 August 1943) was a French philosopher, mystic and political activist. Over 2,500 scholarly works have been published about her, including close analyses and readings of her work, since 1995.After her graduation from formal education, Weil became a teacher. She taught intermittently throughout the 1930s, taking several breaks due to poor health and to devote herself to political activism. Read more on Wikipedia

Simone Weil is most famous for her essay "The Iliad, or the Poem of Force" which discusses the power of violence.

Among philosophers, Simone Weil ranks 144 out of 1,081. Before her are John Rawls, Isocrates, Zhu Xi, Edith Stein, Jiddu Krishnamurti, and Clement of Alexandria. After her are György Lukács, Martin Buber, Hans Kelsen, Duns Scotus, Alexander Gottlieb Baumgarten, and Kabir.