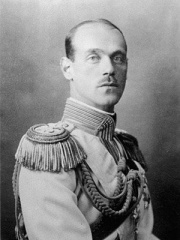 Grand Duke Michael Alexandrovich of Russia (Russian: Михаи́л Алекса́ндрович; 4 December [O.S. 22 November] 1878 – 13 June 1918) was the youngest son and fifth child of Emperor Alexander III of Russia and youngest brother of Nicholas II. At the time of his birth, his paternal grandfather Alexander II was still the reigning Emperor of All the Russias. Michael was fourth-in-line to the throne after his father and elder brothers Nicholas and George. After the assassination of his grandfather in 1881, he became third-in-line and, in 1894, after the death of his father, second-in-line. Read more on Wikipedia

Among noblemen, Grand Duke Michael Alexandrovich of Russia ranks 60 out of 843. Before him are Edward the Black Prince, Sigurd Snake-in-the-Eye, Arthur, Prince of Wales, Prince Gustaf Adolf, Duke of Västerbotten, Lady Jane Grey, and Giuliano de' Medici. After him are Olga of Kiev, Empress Matilda, Jeanne d'Albret, Philip the Bold, Albert I of Germany, and Afonso de Albuquerque.