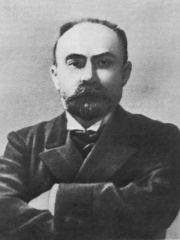 Georgi Valentinovich Plekhanov (; Russian: Гео́ргий Валенти́нович Плеха́нов, IPA: [ɡʲɪˈorɡʲɪj vəlʲɪnˈtʲinəvʲɪtɕ plʲɪˈxanəf] (listen); 11 December [O.S. 29 November] 1856 – 30 May 1918) was a Russian revolutionary, philosopher and Marxist theoretician. He was a founder of the social-democratic movement in Russia and was one of the first Russians to identify himself as "Marxist". Facing political persecution, Plekhanov emigrated to Switzerland in 1880, where he continued in his political activity attempting to overthrow the Tsarist regime in Russia. Read more on Wikipedia

Among philosophers, Georgi Plekhanov ranks 206 out of 1,089. Before him are Rudolf Carnap, Moses Mendelssohn, Pseudo-Dionysius the Areopagite, Étienne Bonnot de Condillac, Solomon ibn Gabirol, and Ibn Tufail. After him are Bayazid Bastami, Benedetto Croce, Pelagius, Muhammad Abduh, Melissus of Samos, and Gabriel Marcel.