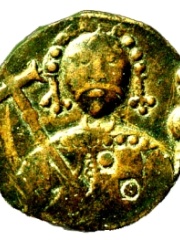 Robert Guiscard (; Modern French: [ɡiskaʁ]; c. 1015 – 17 July 1085) was a Norman adventurer remembered for the conquest of southern Italy and Sicily. Robert was born into the Hauteville family in Normandy, went on to become count and then duke of Apulia and Calabria (1057–1059), duke of Sicily (1059–1085), and briefly prince of Benevento (1078–1081) before returning the title to the papacy. His sobriquet, in contemporary Latin Viscardus and Old French Viscart, is often rendered "the Resourceful", "the Cunning", "the Wily", "the Fox", or "the Weasel". Read more on Wikipedia

Robert Guiscard was a Norman mercenary who became the first Norman ruler of southern Italy and Sicily.

Among noblemen, Robert Guiscard ranks 52 out of 843. Before him are Şehzade Mehmed, Herodias, Philippe II, Duke of Orléans, Marie Thérèse of France, Raynald of Châtillon, and Henrietta of England. After him are Charles, Count of Valois, Edward the Black Prince, Sigurd Snake-in-the-Eye, Arthur, Prince of Wales, Prince Gustaf Adolf, Duke of Västerbotten, and Lady Jane Grey.

Among people born in 1016, Robert Guiscard ranks 2. Before him is Harold Harefoot. After him are Henry III, Holy Roman Emperor, Béla I of Hungary, Ferdinand I of León, Casimir I the Restorer, Deokjong of Goryeo, Amadeus I, Count of Savoy, Svein Knutsson, Emperor Xingzong of Liao, Edward the Exile, and Naropa. Among people deceased in 1085, Robert Guiscard ranks 2. Before him is Pope Gregory VII. After him are Emperor Shenzong of Song, Al-Juwayni, and Cheng Hao.