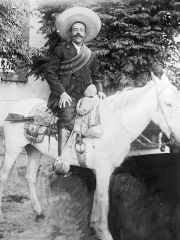 Francisco "Pancho" Villa (UK: , also US: ; Spanish: [ˈbiʎa]; born José Doroteo Arango Arámbula, 5 June 1878 – 20 July 1923) was a general in the Mexican Revolution. He was a key figure in the revolutionary movement that forced out President Porfirio Díaz and brought Francisco I. Madero to power in 1911. When Madero was ousted by a coup led by General Victoriano Huerta in February 1913, he led anti-Huerta forces in the Constitutionalist Army 1913–14. Read more on Wikipedia

Since 2007, the English Wikipedia page of Pancho Villa has received more than 5,452,043 page views. His biography is available in 58 different languages on Wikipedia. Pancho Villa is the 133rd most popular military personnel (down from 98th in 2019), the 8th most popular biography from Mexico and the most popular Mexican Military Personnel.

Pancho Villa was a Mexican revolutionary who led a number of armed rebellions against the Mexican government in the early 1900s. He was most famous for leading the Mexican Revolution, which was a major event in Mexican history.

Among MILITARY PERSONNELS In Mexico