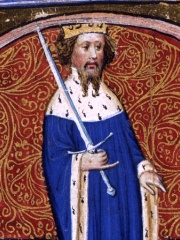 Henry IV (c. April 1367 – 20 March 1413), also known as Henry Bolingbroke, was King of England from 1399 to 1413. He asserted the claim of his grandfather King Edward III, a maternal grandson of Philip IV of France, to the Kingdom of France. Henry was the first English ruler since the Norman Conquest, over three hundred years prior, whose mother tongue was English rather than French.Henry was the son of John of Gaunt, Duke of Lancaster, himself the son of Edward III. John of Gaunt was a power in England during the reign of Henry's cousin Richard II. Read more on Wikipedia

Henry IV is most famous for being the king of England during the time of the War of the Roses, which was a civil war between the houses of Lancaster and York. He was also the father of Henry V, who would go on to become one of the most famous kings in English history.

Page views of Henry IV of Englands by language

Among noblemen, Henry IV of England ranks 45 out of 842. Before him are Otto von Habsburg, Alexander Nevsky, Queen Sofía of Spain, Pope Leo IX, Princess Beatrice of the United Kingdom, and Margaret of Valois. After him are Arthur, Prince of Wales, Giuliano de' Medici, Louis Antoine, Duke of Angoulême, Edward the Black Prince, Grand Duke Michael Alexandrovich of Russia, and Raynald of Châtillon.