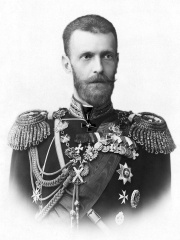 Grand Duke Sergei Alexandrovich of Russia (Сергей Александрович; 11 May 1857 – 17 February 1905) was the fifth son and seventh child of Emperor Alexander II of Russia. He was an influential figure during the reigns of his brother Emperor Alexander III of Russia and his nephew Emperor Nicholas II, who was also his brother-in-law through Sergei's marriage to Elizabeth, the sister of Tsarina Alexandra.Grand Duke Sergei's education gave him lifelong interests in culture and the arts. Like all male members of the Romanov dynasty, he followed a military career, and he fought in the Russo-Turkish War of 1877–78, receiving the Order of St George for courage and bravery in action. Read more on Wikipedia

Among noblemen, Grand Duke Sergei Alexandrovich of Russia ranks 133 out of 842. Before him are Caroline Matilda of Great Britain, Galeazzo Maria Sforza, Prince Leopold of Bavaria, Miguel I of Portugal, Sophia of Hanover, and Cosimo II de' Medici, Grand Duke of Tuscany. After him are Leopold III, Duke of Austria, Isabella d'Este, Christina of Denmark, Robert the Strong, Archduke Ludwig Viktor of Austria, and Princess Augusta of Bavaria.