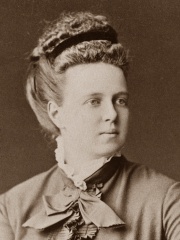 Maria Alexandrovna of Russia (Russian: Мария Александровна; 17 October [O.S. 5 October] 1853 – 24 October 1920) was the fifth child and only surviving daughter of Emperor Alexander II of Russia and Princess Marie of Hesse and by Rhine; she was Duchess of Edinburgh and later Duchess of Saxe-Coburg and Gotha as the wife of Alfred, Duke of Saxe-Coburg and Gotha. She was the younger sister of Alexander III of Russia and the paternal aunt of Russia's last emperor, Nicholas II. In 1874, Maria married Prince Alfred, Duke of Edinburgh, the second son of Queen Victoria and Prince Albert of Saxe-Coburg and Gotha; she was the only Romanov to marry into the British royal family. The couple had five children: Alfred, Marie, Victoria Melita, Alexandra, and Beatrice. Read more on Wikipedia

Maria Alexandrovna was the daughter of Tsar Alexander II and the wife of Grand Duke Karl Ludwig of Hesse. She was most famous for being the mother of three emperors of Russia: Nicholas II, Alexander III, and Constantine II.

Among noblemen, Grand Duchess Maria Alexandrovna of Russia ranks 120 out of 842. Before her are Giovanni di Bicci de' Medici, Felipe VI of Spain, Haakon VI of Norway, Robert Curthose, Joanna of Austria, Princess of Portugal, and Mariana of Austria. After her are Chlodomer, Odo of France, Grand Duke Kirill Vladimirovich of Russia, Maria Goretti, Michael Andreas Barclay de Tolly, and Francis, Duke of Saxe-Coburg-Saalfeld.