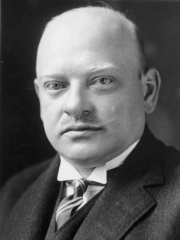 Gustav Ernst Stresemann (German pronunciation: [ˈɡʊstaf ˈʃtʁeːzəˌman] (listen); 10 May 1878 – 3 October 1929) was a German statesman who served as chancellor in 1923 (for 102 days) and as foreign minister from 1923 to 1929, during the Weimar Republic. His most notable achievement was the reconciliation between Germany and France, for which he and French Prime Minister Aristide Briand received the Nobel Peace Prize in 1926. During a period of political instability and fragile, short-lived governments, he was the most influential cabinet member in most of the Weimar Republic's existence. Read more on Wikipedia

Gustav Stresemann was a German politician and diplomat who served as Chancellor of Germany during the Weimar Republic. He is most famous for his work in negotiating the Treaty of Versailles and the Locarno Treaties.

Among politicians, Gustav Stresemann ranks 1,045 out of 15,577. Before him are Feodor II of Russia, Grover Cleveland, Amin al-Husseini, Jérôme Bonaparte, Abdullah I of Jordan, and Sejo of Joseon. After him are Meritaten, Michael VII Doukas, Peter III of Aragon, Ottokar II of Bohemia, Charles II, Archduke of Austria, and Petronius Maximus.