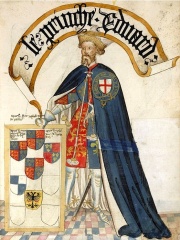 Edward of Woodstock, known to history as the Black Prince (15 June 1330 – 8 June 1376), was the eldest son of King Edward III of England, and the heir apparent to the English throne. He died before his father and so his son, Richard II, succeeded to the throne instead. Edward nevertheless earned distinction as one of the most successful English commanders during the Hundred Years' War, being regarded by his English contemporaries as a model of chivalry and one of the greatest knights of his age.Edward was made Duke of Cornwall, the first English dukedom, in 1337. Read more on Wikipedia

Edward the Black Prince was a medieval English prince and military leader. He was the eldest son of King Edward III of England and Philippa of Hainault. He was the first Duke of Cornwall, the Prince of Wales, and the Prince of Aquitaine. He died of dysentery in 1376, at the age of 45. Edward is most famous for his military victories in the Hundred Years' War against France.

Page views of Edward the Black Princes by language

Among noblemen, Edward the Black Prince ranks 54 out of 843. Before him are Philippe II, Duke of Orléans, Marie Thérèse of France, Raynald of Châtillon, Henrietta of England, Robert Guiscard, and Charles, Count of Valois. After him are Sigurd Snake-in-the-Eye, Arthur, Prince of Wales, Prince Gustaf Adolf, Duke of Västerbotten, Lady Jane Grey, Giuliano de' Medici, and Grand Duke Michael Alexandrovich of Russia.

Among people born in 1330, Edward the Black Prince ranks 2. Before him is Nicolas Flamel. After him are Gongmin of Goryeo, Luo Guanzhong, Robert III of Scotland, Peter Parler, Louis II, Count of Flanders, Altichiero, William I, Duke of Bavaria, Lala Şahin Pasha, Francesc Eiximenis, and André Beauneveu. Among people deceased in 1376, Edward the Black Prince ranks 1. After him is Tenoch.