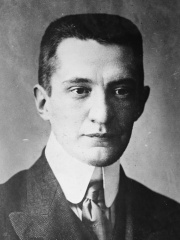 Alexander Fyodorovich Kerensky ( KERR-ən-skee, kə-REN-skee; Russian: Алекса́ндр Фёдорович Ке́ренский, IPA: [ɐlʲɪkˈsandr ˈkʲerʲɪnskʲɪj]; original spelling: Александръ Ѳедоровичъ Керенскій; 4 May [O.S. 22 April] 1881 – 11 June 1970) was a Russian lawyer and revolutionary who was a key political figure in the Russian Revolution of 1917. After the February Revolution of 1917, he joined the newly formed Russian Provisional Government, first as Minister of Justice, then as Minister of War, and after July as the government's second Minister-Chairman. A leader of the moderate-socialist Trudovik faction of the Socialist Revolutionary Party, he was also a vice-chairman of the powerful Petrograd Soviet. Read more on Wikipedia

Alexander Kerensky was a Russian lawyer and politician who served as the Prime Minister of Russia from July to October 1917. He had been a leading member of the moderate faction of the Russian Social Democratic Labour Party.

Among politicians, Alexander Kerensky ranks 773 out of 15,710. Before him are Valéry Giscard d'Estaing, Balian of Ibelin, Isabella II of Spain, Ferdinand I of Bulgaria, François Hollande, and Trygve Lie. After him are Henry VII, Holy Roman Emperor, Lavrentiy Beria, Walter Ulbricht, Justin I, Harald Bluetooth, and Simon of Cyrene.