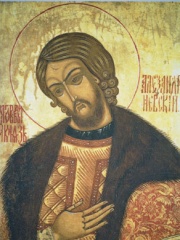 Alexander Yaroslavich Nevsky (Russian: Александр Ярославич Невский, tr. Aleksandr Yaroslavich Nevskiy; pronounced [ɐlʲɪˈksandr jɪrɐˈsɫavʲɪtɕ ˈnʲɛfskʲɪj] (listen); 13 May 1221 – 14 November 1263) served as Prince of Novgorod (1236–40, 1241–56 and 1258–1259), Grand Prince of Kiev (1236–52) and Grand Prince of Vladimir (1252–63) during some of the most difficult times in Kievan Rus' history. Commonly regarded as a key figure of medieval Rus', Alexander was a grandson of Vsevolod the Big Nest and rose to legendary status on account of his military victories over German and Swedish invaders. Read more on Wikipedia

Alexander Nevsky is most famous for his victory over the German Knights in the Battle of the Ice.

Among noblemen, Alexander Nevsky ranks 32 out of 843. Before him are Rudolf, Crown Prince of Austria, Edward VII, Grand Duchess Olga Nikolaevna of Russia, Charles the Bold, Diana, Princess of Wales, and Margaret of Valois. After him are Marie de' Medici, Rainier III, Prince of Monaco, Queen Sofía of Spain, Ramesses III, Princess Beatrice of the United Kingdom, and Henry IV of England.

Among people born in 1220, Alexander Nevsky ranks 2. Before him is Roger Bacon. After him are Pope Martin IV, Llywelyn ap Gruffudd, William of Rubruck, Brunetto Latini, Stefan Uroš I, Alphonse, Count of Poitiers, Traidenis, Emperor Go-Saga, Ugolino della Gherardesca, and Enzo of Sardinia. Among people deceased in 1263, Alexander Nevsky ranks 1. After him are Mindaugas, Haakon IV of Norway, Shinran, Manuel I of Trebizond, and Boniface, Count of Savoy.