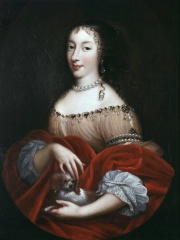 Henrietta Anne of England (16 June 1644 O.S. [26 June 1644 N.S.] – 30 June 1670) was the youngest daughter of King Charles I of England and Queen Henrietta Maria. Fleeing England with her mother and governess at the age of three, Henrietta moved to the court of her first cousin, King Louis XIV of France, where she was known as Minette. She married her other cousin Philippe I, Duke of Orléans and became a fille de France, but their relationship was marked by frequent tensions over common suitors. Read more on Wikipedia

Page views of Henrietta of Englands by language

Among noblemen, Henrietta of England ranks 51 out of 843. Before her are Elizabeth Charlotte, Madame Palatine, Şehzade Mehmed, Herodias, Philippe II, Duke of Orléans, Marie Thérèse of France, and Raynald of Châtillon. After her are Robert Guiscard, Charles, Count of Valois, Edward the Black Prince, Sigurd Snake-in-the-Eye, Arthur, Prince of Wales, and Prince Gustaf Adolf, Duke of Västerbotten.