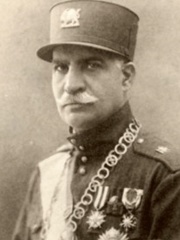 Reza Shah Pahlavi (Persian: رضا شاه پهلوی‎; pronounced [ɾeˈzɒː ˈʃɒːh-e pæhlæˈviː]; 15 March 1878 – 26 July 1944), commonly known as Reza Shah, was the Shah of Iran from 15 December 1925 until he was forced to abdicate by the Anglo-Soviet invasion of Iran on 16 September 1941. Two years after the 1921 Persian coup d'état, led by Zia ol Din Tabatabaee, Reza Pahlavi became Iran's prime minister. The appointment was backed by the compliant national assembly of Iran. Read more on Wikipedia

Since 2007, the English Wikipedia page of Reza Shah has received more than 1,542,095 page views. His biography is available in 57 different languages on Wikipedia making him the 560th most popular politician.

Among politicians, Reza Shah ranks 556 out of 14,801. Before him are Louis VI of France, Peleus, Louis IV, Holy Roman Emperor, Ante Pavelić, Sun Quan, and Lycurgus of Sparta. After him are Frederick William III of Prussia, Claudius Gothicus, Charles XV of Sweden, Gustav III of Sweden, Valentinian I, and Mobutu Sese Seko.