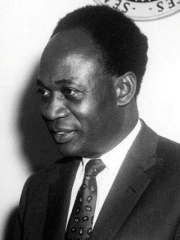 Kwame Nkrumah (21 September 1909 – 27 April 1972) was a Ghanaian politician, political theorist, and revolutionary. He was the first Prime Minister and President of Ghana, having led the Gold Coast to independence from Britain in 1957. An influential advocate of Pan-Africanism, Nkrumah was a founding member of the Organization of African Unity and winner of the Lenin Peace Prize from the Soviet Union in 1962.After twelve years abroad pursuing higher education, developing his political philosophy, and organizing with other diasporic pan-Africanists, Nkrumah returned to the Gold Coast to begin his political career as an advocate of national independence. Read more on Wikipedia

Kwame Nkrumah was the first president of Ghana. He led Ghana to independence from British colonial rule in 1957. He was then overthrown in a military coup in 1966.

Among politicians, Kwame Nkrumah ranks 1,184 out of 15,710. Before him are Antiochus I Soter, Muawiya II, Marie Louise d’Orléans, F. W. de Klerk, Turgut Özal, and John III of Portugal. After him are Emir Abdelkader, Nabopolassar, Helmut Schmidt, U Thant, Daniel Ortega, and Abu Ubaidah ibn al-Jarrah.