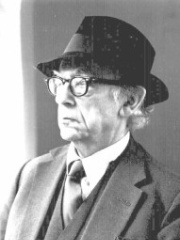 Sir Isaiah Berlin (6 June 1909 – 5 November 1997) was a Russian-British social and political theorist, philosopher, and historian of ideas. Although he became increasingly averse to writing for publication, his improvised lectures and talks were sometimes recorded and transcribed, and many of his spoken words were converted into published essays and books, both by himself and by others, especially his principal editor from 1974, Henry Hardy. Born in Riga (now the capital of Latvia, then a part of the Russian Empire) in 1909, he moved to Petrograd, Russia, at the age of six, where he witnessed the revolutions of 1917. Read more on Wikipedia

Isaiah Berlin is most famous for his essay "Two Concepts of Liberty."

Among philosophers, Isaiah Berlin ranks 222 out of 1,081. Before him are Joseph de Maistre, Chilon of Sparta, Bias of Priene, Slavoj Žižek, Benedetto Croce, and Miguel de Unamuno. After him are Baltasar Gracián, Paul Feyerabend, Giorgio Agamben, Milarepa, Bernard Bolzano, and Bayazid Bastami.

Among PHILOSOPHERS In Latvia