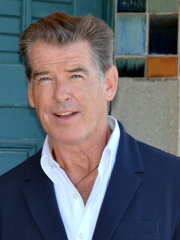 Pierce Brendan Brosnan (; born 16 May 1953) is an Irish actor and film producer. He is best known as the fifth actor to play secret agent James Bond in the Bond film series, starring in four films from 1995 to 2002 (GoldenEye, Tomorrow Never Dies, The World Is Not Enough and Die Another Day) and in multiple video games. After leaving school at age 16, Brosnan began training in commercial illustration and went on to attend the Drama Centre in London for three years. Read more on Wikipedia

Pierce Brosnan is most famous for playing James Bond in a series of films from 1995 to 2002.