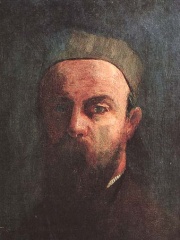 Odilon Redon (born Bertrand Redon; French: [ʁədɔ̃]; 20 April 1840 – 6 July 1916) was a French symbolist painter, printmaker, draughtsman and pastellist. Early in his career, both before and after fighting in the Franco-Prussian War, he worked almost exclusively in charcoal and lithography, works referred to as noirs. He started gaining recognition after his drawings were mentioned in the 1884 novel À rebours (Against Nature) by Joris-Karl Huysmans. Read more on Wikipedia

Odilon Redon is most famous for his paintings of flowers, which are often seen as symbolizing the fragility of life.

Among painters, Odilon Redon ranks 129 out of 1,421. Before him are Jean-Baptiste-Siméon Chardin, Edward Hopper, Georgia O'Keeffe, Parmigianino, Juan Gris, and Albrecht Altdorfer. After him are John Constable, Franz Marc, Francis Bacon, Robert Delaunay, Jan Brueghel the Elder, and Man Ray.