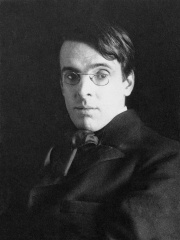 William Butler Yeats (13 June 1865 – 28 January 1939) was an Irish poet, dramatist, writer and one of the foremost figures of 20th-century literature. He was a driving force behind the Irish Literary Revival and became a pillar of the Irish literary establishment who helped to found the Abbey Theatre, and in his later years served two terms as a Senator of the Irish Free State. A Protestant of Anglo-Irish descent, Yeats was born in Sandymount and was educated in Dublin and London and spent childhood holidays in County Sligo. Read more on Wikipedia

W. B. Yeats is most famous for his poetry. He was a member of the Irish Literary Revival and a Nobel Prize in Literature laureate in 1923.

Page views of W. B. Yeats by language

Among writers, W. B. Yeats ranks 353 out of 5,794. Before him are Kenzaburō Ōe, Théophile Gautier, Sholem Aleichem, Paul Celan, Archilochus, and Paul Heyse. After him are Dan Brown, Filippo Tommaso Marinetti, Jean Genet, Apollonius of Rhodes, Elfriede Jelinek, and Nadine Gordimer.