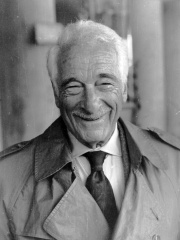 Børge Rosenbaum (3 January 1909 – 23 December 2000), known professionally as Victor Borge ( BOR-gə), was a Danish-American comedian, conductor, and pianist who achieved great popularity in radio and television in the United States and Europe. Read more on Wikipedia

Victor Borge was a Danish pianist and comedian who was most famous for his comedy routines.

Among people born in 1909, Victor Borge ranks 10. Before him are Juliana of the Netherlands, Peter Drucker, Simone Weil, Andrei Gromyko, Mohammed Daoud Khan, and Francis Bacon. After him are Nicholas Winton, U Thant, Rita Levi-Montalcini, Isaiah Berlin, Kwame Nkrumah, and Mohammed V of Morocco. Among people deceased in 2000, Victor Borge ranks 6. Before him are Hafez al-Assad, Hedy Lamarr, Władysław Szpilman, Ingrid of Sweden, and Habib Bourguiba. After him are Alec Guinness, Emil Zátopek, Roger Vadim, Stanley Matthews, Friedensreich Hundertwasser, and Lída Baarová.

Among MUSICIANS In Denmark