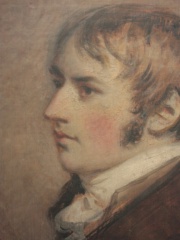 John Constable (; 11 June 1776 – 31 March 1837) was an English landscape painter in the Romantic tradition. Born in Suffolk, he is known principally for revolutionising the genre of landscape painting with his pictures of Dedham Vale, the area surrounding his home – now known as "Constable Country" – which he invested with an intensity of affection. "I should paint my own places best", he wrote to his friend John Fisher in 1821, "painting is but another word for feeling".Constable's most famous paintings include Wivenhoe Park (1816), Dedham Vale (1821) and The Hay Wain (1821). Read more on Wikipedia

John Constable is most famous for his paintings of the English countryside.

Among people born in 1776, John Constable ranks 5. Before him are E. T. A. Hoffmann, Amedeo Avogadro, Johann Friedrich Herbart, and Sophie Germain. After him are Louise of Mecklenburg-Strelitz, Caroline of Baden, Ioannis Kapodistrias, Archduke Joseph, Palatine of Hungary, Johann Wilhelm Ritter, Pehr Henrik Ling, and Barthold Georg Niebuhr. Among people deceased in 1837, John Constable ranks 5. Before him are Alexander Pushkin, William IV of the United Kingdom, Charles Fourier, and Gustav IV Adolf of Sweden. After him are Hortense de Beauharnais, Johann Nepomuk Hummel, Georg Büchner, Giacomo Leopardi, François Gérard, Wilhelmine of Prussia, Queen of the Netherlands, and John Field.