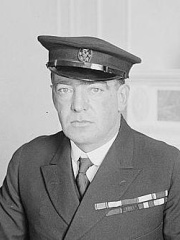 Sir Ernest Henry Shackleton (15 February 1874 – 5 January 1922) was an Anglo-Irish Antarctic explorer who led three British expeditions to the Antarctic. He was one of the principal figures of the period known as the Heroic Age of Antarctic Exploration. Born in Kilkea, County Kildare, Ireland, Shackleton and his Anglo-Irish family moved to Sydenham in suburban south London when he was ten. Shackleton's first experience of the polar regions was as third officer on Captain Robert Falcon Scott's Discovery expedition of 1901–1904, from which he was sent home early on health grounds, after he and his companions Scott and Edward Adrian Wilson set a new southern record by marching to latitude 82°S. Read more on Wikipedia

Ernest Shackleton was an explorer who led three expeditions to the Antarctic. He is most famous for his 1914-1917 expedition where he led 27 men on a ship called the Endurance to Antarctica, but their ship became stuck in ice and they were forced to abandon it and make a treacherous journey across the ice to reach safety.

Among EXPLORERS In Ireland