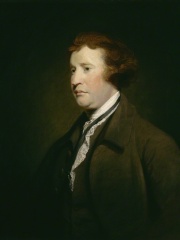 Edmund Burke (; 12 January [NS] 1729 – 9 July 1797) was an Irish statesman, economist, and philosopher. Born in Dublin, Burke served as a member of parliament (MP) between 1766 and 1794 in the House of Commons of Great Britain with the Whig Party after moving to London in 1750. Burke was a proponent of underpinning virtues with manners in society and of the importance of religious institutions for the moral stability and good of the state. Read more on Wikipedia

Edmund Burke is most famous for his work on the French Revolution, in which he argued that the revolution was a natural consequence of the Enlightenment and the ideas of the philosophes.

Among politicians, Edmund Burke ranks 612 out of 15,710. Before him are Sun Quan, Hamza ibn Abdul-Muttalib, Louis VI of France, Elena Ceaușescu, Anne, Queen of Great Britain, and Nebuchadnezzar I. After him are Epaminondas, Ptolemy XIV of Egypt, Claudius Gothicus, Nurhaci, Suharto, and Vidkun Quisling.