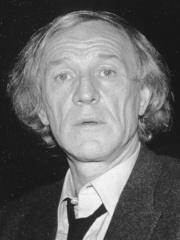 Richard St John Harris (1 October 1930 – 25 October 2002) was an Irish actor and singer. He appeared on stage and in many films, notably as Frank Machin in This Sporting Life, for which he was nominated for the Academy Award for Best Actor, and as King Arthur in the 1967 film Camelot, as well as the 1981 revival of the stage musical. He played an aristocrat captured by Native Americans in A Man Called Horse (1970), a gunfighter in Clint Eastwood's Western film Unforgiven (1992), Roman emperor Marcus Aurelius in Gladiator (2000), The Count of Monte Cristo (2002) as Abbé Faria, and Albus Dumbledore in the first two Harry Potter films: Harry Potter and the Philosopher’s Stone (2001) and Harry Potter and the Chamber of Secrets (2002), the latter of which was his final film role. Read more on Wikipedia

Richard Harris is most famous for playing the role of King Arthur in the film "Excalibur."