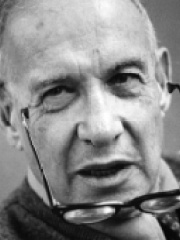 Peter Ferdinand Drucker (; German: [ˈdʀʊkɐ]; November 19, 1909 – November 11, 2005) was an Austrian-American management consultant, educator, and author, whose writings contributed to the philosophical and practical foundations of the modern business corporation. He was also a leader in the development of management education, he invented the concept known as management by objectives and self-control, and he has been described as "the founder of modern management".Drucker's books and articles, both scholarly and popular, explored how humans are organized across the business, government, and nonprofit sectors of society. He is one of the best-known and most widely influential thinkers and writers on the subject of management theory and practice. Read more on Wikipedia

Peter Drucker is most famous for his work in the field of management. He is best known for his book, "The Practice of Management."

Among writers, Peter Drucker ranks 273 out of 5,794. Before him are Antonin Artaud, Shota Rustaveli, Amos Oz, Fuzûlî, Carlos Castaneda, and Friedrich Hölderlin. After him are William Wordsworth, Adam Mickiewicz, Paul Valéry, Jordanes, Karl May, and Alice Munro.

Among people born in 1909, Peter Drucker ranks 4. Before him are Eugène Ionesco, Juliana of the Netherlands, and Simone Weil. After him are Francis Bacon, Andrei Gromyko, Stepan Bandera, Rita Levi-Montalcini, Kwame Nkrumah, U Thant, Osamu Dazai, and Elia Kazan. Among people deceased in 2005, Peter Drucker ranks 6. Before him are Pope John Paul II, Rosa Parks, Rainier III, Prince of Monaco, George Best, and Rinus Michels. After him are Fahd of Saudi Arabia, Arthur Miller, Paul Ricœur, Claude Simon, Rafic Hariri, and Simon Wiesenthal.