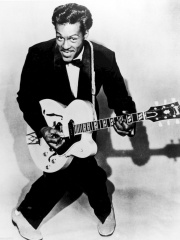 Charles Edward Anderson Berry (October 18, 1926 – March 18, 2017) was an American singer, songwriter and guitarist who pioneered rock and roll. Nicknamed the "Father of Rock and Roll", he refined and developed rhythm and blues into the major elements that made rock and roll distinctive with songs such as "Maybellene" (1955), "Roll Over Beethoven" (1956), "Rock and Roll Music" (1957) and "Johnny B. Goode" (1958). Writing lyrics that focused on teen life and consumerism, and developing a music style that included guitar solos and showmanship, Berry was a major influence on subsequent rock music.Born into a middle-class black family in St. Read more on Wikipedia

Chuck Berry is most famous for his guitar playing and for being one of the pioneers of rock and roll.

Among musicians, Chuck Berry ranks 22 out of 2,675. Before him are Elton John, Arcangelo Corelli, Madonna, Ray Charles, Brian May, and Cat Stevens. After him are Eric Clapton, Mark Knopfler, Jeff Beck, Frank Zappa, Giuseppe Tartini, and Władysław Szpilman.