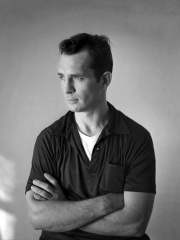 Jean-Louis Lebris de Kérouac (; March 12, 1922 – October 21, 1969), known as Jack Kerouac, was an American novelist and poet who, alongside William S. Burroughs and Allen Ginsberg, was a pioneer of the Beat Generation.Of French-Canadian ancestry, Kerouac was raised in a French-speaking home in Lowell, Massachusetts. He "learned English at age six and spoke with a marked accent into his late teens." During World War II, he served in the United States Merchant Marine; he completed his first novel at the time, which was published more than 50 years after his death. His first published book was The Town and the City (1950), and he achieved widespread fame and notoriety with his second, On the Road, in 1957. Read more on Wikipedia

Jack Kerouac is most famous for his novel On the Road, which documents a cross-country trip he took with Neal Cassady in the late 1940s.

Among writers, Jack Kerouac ranks 319 out of 5,755. Before him are Raymond Chandler, Paul Celan, Callimachus, Gregory of Tours, Karl May, and François Mauriac. After him are Ezra Pound, Carlos Castaneda, Georges Bataille, Arthur Schnitzler, Einhard, and Dionysius of Halicarnassus.