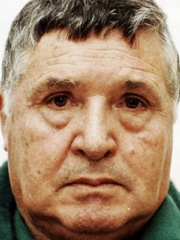 Salvatore Riina (Italian pronunciation: [salvaˈtoːre (toˈtɔ r)riˈiːna]; 16 November 1930 – 17 November 2017), called Totò 'u Curtu (Sicilian for '"Totò the Short"', Totò being the diminutive of Salvatore), was an Italian mobster and chief of the Sicilian Mafia, known for a ruthless murder campaign that reached a peak in the early 1990s with the assassinations of Antimafia Commission prosecutors Giovanni Falcone and Paolo Borsellino, resulting in widespread public outcry and a major crackdown by the authorities. He was also known by the nicknames la belva ("the beast") and il capo dei capi (Sicilian: 'u capu di 'i capi, "the boss of bosses"). Riina succeeded Luciano Leggio as head of the Corleonesi criminal organisation in the mid 1970s and achieved dominance through a campaign of violence, which caused police to target his rivals. Read more on Wikipedia

Salvatore Riina is most famous for being the boss of the Sicilian Mafia. He was also known as "The Beast" and "The Boss of Bosses." Riina was arrested in 1993 and is currently serving a life sentence.

Among mafiosos, Salvatore Riina ranks 7 out of 52. Before him are Pablo Escobar, Al Capone, Billy the Kid, Lucky Luciano, John Dillinger, and Jesse James. After him are Jack Ruby, Frank Abagnale, Bernie Madoff, Jeffrey Epstein, Meyer Lansky, and Karl Gebhardt.