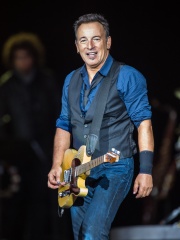 Bruce Frederick Joseph Springsteen (born September 23, 1949) is an American singer, songwriter, and musician. He has released twenty studio albums, many of which feature his backing band, the E Street Band. Originally from the Jersey Shore, he is one of the originators of the heartland rock style of music, combining mainstream rock musical style with narrative songs about working class American life. Read more on Wikipedia

Bruce Springsteen is most famous for his work as a rock and roll singer-songwriter. He is also known for his distinctive voice and his long, energetic stage performances.