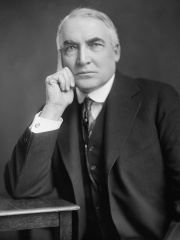 Warren Gamaliel Harding (November 2, 1865 – August 2, 1923) was the 29th president of the United States from 1921 until his death in 1923. A member of the Republican Party, he was one of the most popular U.S. presidents to that point. Read more on Wikipedia

Since 2007, the English Wikipedia page of Warren G. Harding has received more than 7,717,377 page views. His biography is available in 113 different languages on Wikipedia making him the 1,249th most popular politician.

Among politicians, Warren G. Harding ranks 1,243 out of 14,801. Before him are Mohammed V of Morocco, Cyrus the Younger, Walther Funk, Akbar Hashemi Rafsanjani, Friedrich Ratzel, and Zhao Ziyang. After him are Albert Lebrun, Emperor Kōmei, Emperor Wen of Sui, Margaret Theresa of Spain, Scorpion I, and Libius Severus.

Among people born in 1865, Warren G. Harding ranks 10. Before him are George V, Erich Ludendorff, W. B. Yeats, Ferdinand I of Romania, Alexander Glazunov, and Arthur Harden. After him are Archduke Otto of Austria, Carl Nielsen, Richard Adolf Zsigmondy, Sven Hedin, Émile Jaques-Dalcroze, and Paul Dukas. Among people deceased in 1923, Warren G. Harding ranks 11. Before him are Wilhelm Röntgen, Princess Helena of the United Kingdom, Jaroslav Hašek, Constantine I of Greece, Pancho Villa, and John Venn. After him are Dietrich Eckart, Julius Martov, Pierre Loti, Damdin Sükhbaatar, James Dewar, and Joaquín Sorolla.