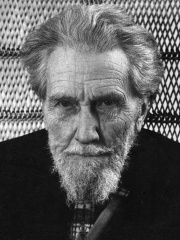 Ezra Weston Loomis Pound (30 October 1885 – 1 November 1972) was an expatriate American poet and critic, a major figure in the early modernist poetry movement, and a fascist collaborator in Italy during World War II. His works include Ripostes (1912), Hugh Selwyn Mauberley (1920), and his 800-page epic poem, The Cantos (c. 1917–1962).Pound's contribution to poetry began in the early 20th century with his role in developing Imagism, a movement stressing precision and economy of language. Working in London as foreign editor of several American literary magazines, he helped discover and shape the work of contemporaries such as T. S. Eliot, Ernest Hemingway, and James Joyce. He was responsible for the 1914 serialization of Joyce's A Portrait of the Artist as a Young Man, the 1915 publication of Eliot's "The Love Song of J. Read more on Wikipedia

Among writers, Ezra Pound ranks 320 out of 5,755. Before him are Paul Celan, Callimachus, Gregory of Tours, Karl May, François Mauriac, and Jack Kerouac. After him are Carlos Castaneda, Georges Bataille, Arthur Schnitzler, Einhard, Dionysius of Halicarnassus, and Graham Greene.