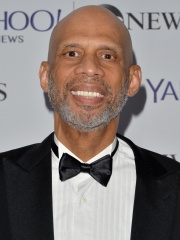 Kareem Abdul-Jabbar ( kə-REEM ab-DOOL jə-BAR; born Ferdinand Lewis Alcindor Jr.; April 16, 1947) is an American former professional basketball player who played 20 seasons in the National Basketball Association (NBA) for the Milwaukee Bucks and the Los Angeles Lakers. During his career as a center, Abdul-Jabbar was a record six-time NBA Most Valuable Player (MVP), a record 19-time NBA All-Star, a 15-time All-NBA Team member, and an 11-time NBA All-Defensive Team member. He was a member of six NBA championship teams as a player and two more as an assistant coach, and was twice voted NBA Finals MVP. He was named to three NBA anniversary teams (35th, 50th, and 75th). Read more on Wikipedia

Kareem Abdul-Jabbar is most famous for being a professional basketball player and the all-time leading scorer in the National Basketball Association.