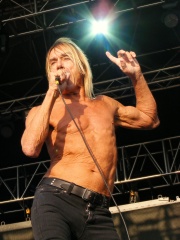 James Newell Osterberg Jr. (born April 21, 1947), known professionally as Iggy Pop, is an American singer, musician, radio broadcaster, songwriter and actor. Called the "Godfather of Punk", he was the vocalist and lyricist of proto-punk band The Stooges, who were formed in 1967 and have disbanded and reunited many times since.Initially playing a raw, primitive style of rock and roll (progressing later towards more experimental and aggressive rock), the Stooges sold few records in their original incarnation and gained a reputation for their confrontational performances, which often involved acts of self-mutilation by Pop. Read more on Wikipedia

Iggy Pop is most famous for being a singer and songwriter. He was the lead singer of the band The Stooges and has a solo career as well.