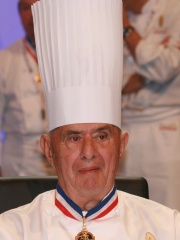 Paul Bocuse (French pronunciation: ​[pɔl bɔkyz]; 11 February 1926 – 20 January 2018) was a French chef based in Lyon who was known for the high quality of his restaurants and his innovative approaches to cuisine. A student of Eugénie Brazier, he was one of the most prominent chefs associated with the nouvelle cuisine, which is less opulent and calorific than the traditional cuisine classique, and stresses the importance of fresh ingredients of the highest quality. Read more on Wikipedia

Paul Bocuse is a French chef who is most famous for his nouvelle cuisine.

Among politicians, Paul Bocuse ranks 1,284 out of 15,577. Before him are Halford Mackinder, Fredrik Bajer, Henry the Lion, Æthelred the Unready, Totila, and Georgy Lvov. After him are Stateira II, Camille Desmoulins, Walther Funk, Theophilos, Ion Iliescu, and Michelle Bachelet.