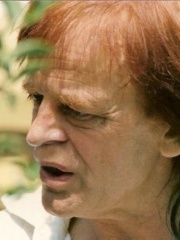 Klaus Kinski (German: [klaʊs ˈkɪnskiː] (listen), born Klaus Günter Karl Nakszynski 18 October 1926 – 23 November 1991) was a German actor, equally renowned for his intense performance style and notorious for his volatile personality. He appeared in over 130 film roles in a career that spanned 40 years, from 1948 to 1988. He played leading parts in five films directed by Werner Herzog (Aguirre, the Wrath of God, 1972; Nosferatu the Vampyre, 1979; Woyzeck, also 1979; Fitzcarraldo, 1982; Cobra Verde, 1987), who later chronicled their tumultuous relationship in the documentary My Best Fiend (1999).Kinski's roles spanned multiple genres, languages, and nationalities, including many Spaghetti Westerns (such as For a Few Dollars More, 1965; A Bullet for the General, 1966; The Great Silence, 1968; And God Said to Cain, 1970), horror films, war movies, dramas, and Edgar Wallace krimi pictures. Read more on Wikipedia

Klaus Kinski is most famous for his role as a Nazi officer in the film "Aguirre, the Wrath of God."