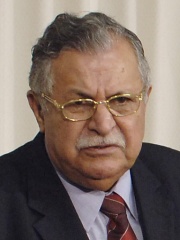 Jalal Talabani (Kurdish: جەلال تاڵەبانی‎ / Celal Talebanî; Arabic: جلال طالباني‎ Jalāl Ṭālabānī; 1933 – 3 October 2017) was an Iraqi Kurdish politician who served as the sixth President of Iraq from 2006 to 2014, as well as the President of the Governing Council of Iraq. He was the first non-Arab president of Iraq. He is known as Mam Jalal (uncle Jalal) in the Middle East.Talabani was the founder and secretary-general of one of the main Kurdish political parties, the Patriotic Union of Kurdistan (PUK). Read more on Wikipedia

Among politicians, Jalal Talabani ranks 1,030 out of 15,710. Before him are Édouard Daladier, Agrippina the Elder, Demetrius I of Macedon, Emperor Wu of Jin, Richard Cromwell, and Zachary Taylor. After him are Probus, Abdullah I of Jordan, 5th Dalai Lama, Jean Monnet, Frederick V of Denmark, and Grover Cleveland.