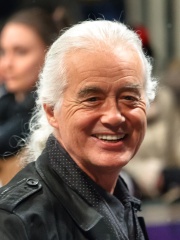 James Patrick Page (born 9 January 1944) is an English musician, songwriter, multi-instrumentalist and record producer who achieved international success as the guitarist and founder of the rock band Led Zeppelin. Page is prolific in creating guitar riffs and his varied style involves various alternate guitar tunings, technical, and melodic solos coupled with aggressive, distorted guitar tones as well as his folk and eastern-influenced acoustic work. He is also noted for occasionally playing his guitar with a cello bow to create a droning sound texture to the music.Page began his career as a studio session musician in London and, by the mid-1960s, alongside Big Jim Sullivan, was one of the most sought-after session guitarists in Britain. Read more on Wikipedia

Jimmy Page is most famous for being the guitarist and lead songwriter for the band Led Zeppelin.