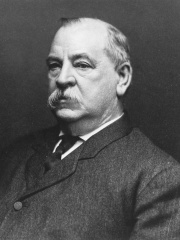 Stephen Grover Cleveland (March 18, 1837 – June 24, 1908) was an American politician and lawyer who was the 22nd and 24th president of the United States, the only president in American history to serve two non-consecutive terms in office (1885–1889 and 1893–1897). He won the popular vote for three presidential elections—in 1884, 1888, and 1892—and was one of two Democrats (with Woodrow Wilson) to be elected president during the era of Republican political domination dating from 1861 to 1933. Born to a Presbyterian minister, Cleveland grew up in upstate New York. Read more on Wikipedia

Since 2007, the English Wikipedia page of Grover Cleveland has received more than 7,026,861 page views. His biography is available in 114 different languages on Wikipedia making him the 1,088th most popular politician.

Among politicians, Grover Cleveland ranks 1,083 out of 14,801. Before him are Anton Drexler, John III Doukas Vatatzes, Aristide Briand, Xianfeng Emperor, Lothair of France, and Gyula Andrássy. After him are Gustav Stresemann, Masinissa, Theodore I Laskaris, Pierre Laval, Asparuh of Bulgaria, and Aristides.